Several years ago, I received a Craftsman 19.2v cordless drill set as a gift. It came with 2 batteries and, over the years, the drill and the batteries have served me quite well. About a year ago after a particularly harsh winter, I tried to charge the batteries but the charger showed them as defective. Turns out that if the battery goes completely dead, the charger believes that it is defective and will not charge them.

Thanks to the power of the Internet, I was able to "jump start" my dead batteries to where the charger would not see them as defective and charge them. I should note that the idea was not my own but came from the user FongBar via this post.

Since I believed that both of my batteries were beyond repair, I had already purchased a new battery that was fully functional. Having a fully functional and charged battery is important because this is how we will "jump start" the old battery.

To start, I went to Harbor Freight and bought these CEN-TECH 18" Low Voltage Multi-Colored Test Leads.These will be used to transfer the charge from one battery to the other. 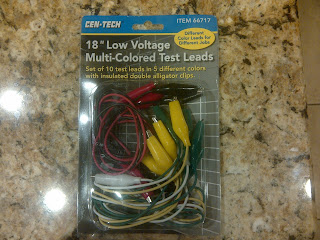 Once you have the leads, the charged battery, and the defective battery, you are ready to hook up the two to start transferring the charge. 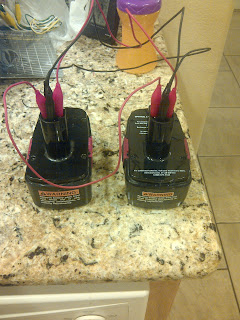 Once the batteries are hooked together, let them sit from 20 - 30 minutes. Once the time has passed, I put the old, defective battery on the charger and it started charging again. This procedure only has to be done once and your battery should charge normally from this point forward.

Disclaimer: This tutorial is without guarantee and all liability rest solely with the reader.
Posted by Kevin at 10:52 PM 7 comments:

If your running SQL Server 2008 Enterprise and have the need to restrict certain users or groups from executing runaway queries, then the Resource Governor might be what you are looking for. By creating the right mix of workload groups and resource pools, a DBA can create an environment that is more predictable and stable, while maintaining the availability of resources for all users.

In this example, I'll create a Workload Group that only Windows logins will use. I used the distinction of Windows logins vs SQL logins because all the produciton applications hitting this server use SQL authentication while any users (aside from the sys admins) doing ad hoc analytics use Windows authentication. Many times when users are doing ad hoc analytics, they are digging through the data and looking for trends, which lends itself to someone using "Select *".  That kind of query on very wide and deep tables can easily lock a table needed for the production applications. This is where the resource governor can help. By limiting the amount of resources a query or a session can have, a DBA can make other sessions on the server execute more predicitbly.


There is quite a bit of setup involved with the Resource Governor and there are many different ways to do it, so that steps I take below will obviously have to be tailored to your enviornment.

Now we need to populate the table with all the existing SQL Logins.

Insert Into SQLLoginsList
Select Name From sys.Server_Principals Where [Type] = N'S'


Once the table is in place, a server trigger needs to be created to insert into the SQLLoginsList table any time a new SQL Login is created.


Now that we have a place to query SQL Logins and a mechanism to catch newly created ones, we can start creating our Resource Pool and Workload Group.


When creating a Workload Group, there are 6 properties that can be set.
1.       IMPORTANCE: Gives a precedence or "importance" to CPU resources available in the Resource Pool.
2.       REQUEST_MAX_MEMORY_GRNT_PERCENT: Amount of memory one request can take from Resource Pool.
3.       REQUEST_MAX_CPU_TIME_SEC: Amount of total CPU time a request can have.
4.       REQUEST_MEMORY_GRANT_TIMEOUT_SEC: Maximum amount of time a request will wait for resource to free up.
5.       MAX_DOP: Max Degree of Parallelism a query can execute with. This option takes precedence over any query hint or server setting.
6.       GROUP_MAX_REQUESTS: Amount of requests this group can simultaneously issue.

CREATE WORKLOAD GROUP gAdhocProcessing
WITH
(IMPORTANCE = LOW --Low importance meaning the scheduler will execute medium (default) session 3 times more often
,REQUEST_MAX_MEMORY_GRANT_PERCENT = 25 --one person can only take 25 percent of the memory afforded to the pool
,REQUEST_MAX_CPU_TIME_SEC = 60 --can only take a TOTAL of 60 seconds of CPU time (this is not total query time)
,REQUEST_MEMORY_GRANT_TIMEOUT_SEC = 60 --max amount of time a query will wait for resource to become available
,MAX_DOP = 1 --overrides all other DOP hints and server settings
,GROUP_MAX_REQUESTS = 0 --unlimited requests (default) in this group
)

At this point, we should see the following under Management --> Resource Governor 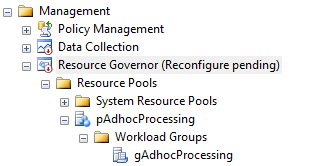 
Finally, we'll create our Classifier Function that will place all incoming requests into either the gAdhocProcessing group or the default group. This function looks a lot like any other scalar function with the excepting that is had to be created using "With SchemaBinding". Based on the login type and whether the login is a sysadmin, the function will return what Resource Group the request should fall into.


--If nothing is returned, put it in the default group just in case
Return N'default'
End
GO


Now that the Classifier Function has been created we have to tell the Resource Governor to use that function as it's classifier.


At this point, if we right click the  Resource Governor in the Object Explorer and choose properties we will should see the following.


Now all that's left to do is turn it on. We can do that by issuing the following command.

Once the Resource Governor is turned on, we can monitor the amount of sessions each login has open and what Workload Group they have been assigned to.


If for some reason the Resource Governor is not working as it should, issue the following command to disable it.